The North Solano Intergroup-much more than just an office

The North Solano Intergroup of Alcoholics Anonymous is an A.A. service office that involves partnership among groups in a community — just as A.A. groups themselves are partnerships of individuals. It was established to carry out certain functions common to all the groups— functions which are best handled by a centralized office — and it is maintained, supervised, and supported by these groups in their general interest. It exists to aid the groups in their common purpose of carrying the A.A. message to the alcoholic who still suffers.

The Intergroup is a separately-incorporated entity as per our Tradition 6 (long form) that houses our literature for sale, has an answering service, provides meeting schedules and many other services. It is managed by a Board of Directors and has a monthly meeting of delegates from the respective groups that meets on the third Wednesday of each month at 7:00 pm. 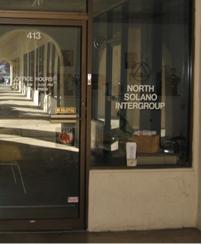 HISTORY OF THE NORTH SOLANO INTERGROUP

On Monday, July 28, 1986, the North Solano Intergroup Office opened its doors for the first time.

The present office, at 413 William Street in Vacaville, is actually the third location. The first was in a house at 335 Nut Tree Road.

“They got an opportunity to get a house for almost nothing that was in the middle of an orchard where the Factory Stores were going to go in,” longtime member Carole D. said. “We had a living room, a meeting room—a lot of space.”

Before the office opened, the local group service committee had a P.O. Box in Fairfield and members met monthly at the Vacaville Courthouse at 600 Merchant Street.

“The meetings were run with a lot of formality. We used Robert’s Rules of Order,” Carole D. said. “You addressed the chair formerly and everything was done properly.”

The Intergroup, like most things in AA, grew out of a need. In the June 1986 Happenings Newsletter, then District 90 District Committee Member Chair Fred T. wrote: “Although it has long been planned, the immediate impetus for action originated at the group level. It will perform such functions as the answering service, the Happenings, a source for AA literature for the groups, social functions and other services as may be deemed appropriate. Although it will be a separate corporate entity, it will need the support of the groups for financing and volunteer workers.”

A debt of gratitude is owed to the numerous individuals and groups who contributed their time and resources to making the dream of an Intergroup Office, and the life-giving sobriety functions it supplies, a reality.